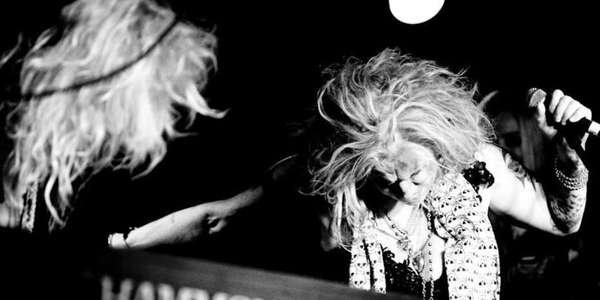 In the very heart of the notorious London rock and roll scene exists a whirlwind duo of female energy & ecstasy, please meet……… NEVER THE BRIDE

Their live performance is to be held in awe, purely in anticipation of the live operatic architecture they consistently unfurl upon their willing audiences. Having invaded venues ranging from The Royal Albert Hall (on multiple occasions), Wembley Arena supporting The Who, playing alongside Elton John, appearing in The British Rock Symphony Australia & UK, tours alongside Roger Daltrey and Paul Rogers. They have also stormed venues such as The Viper Room in LA - where they were noted as one of the top favorite moments of the past 21 years - and Eurofests galore to intimate spaces like The Green Note in Camden. Never The Bride have amazed and floored a variety of audiences throughout their 25 years of service – these ladies are true rock and roll royalty!

Roger Daltrey quoted “Nikki Lamborn has the best female rock voice since Janis Joplin and I know what I’m talking about, I knew Janis”. The legendary Dame Shirley Bassey called the girls “inspirational”, they have performed shows for Cher and Liza Minnelli. Bob Harris from BBC Radio 2 referred to them as “one of the best live bands in Britain”. The ladies’ rollcall list is simply mind blowing – as are the stories they readily share.

Bristol born Nikki Lamborn carries the dynamo vocal lead, whilst Glaswegian Catherine ‘Been’ Feeney asserts the ‘sonic art’ with keys and vocals. Their raw unfettered talent is undeniable and is enough to justify the impression the girls have left on audiences throughout Never The Bride’s 25 years of global domination.

Never The Bride have released six studio albums to date, with their latest outing due to be released early 2017. Their legendary career merely represents their journey so far – and remains a testament for what dangerously is yet to come…………

To celebrate the release of our new album 'Long Live LIVE', with your ticket for our show at the Louisiana you will be given a discount code for 25% OFF the brand new CD in our website store at neverthebride.com . Just enter the code provided with your confirmation email at checkout in store, and enjoy the album! See you at the Louisiana!