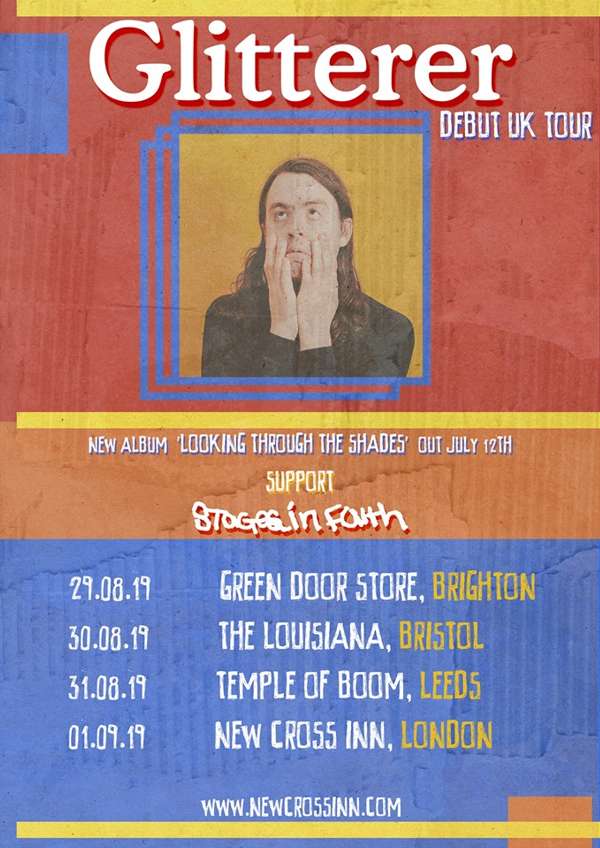 Glitterer is the latest project by Ned Russin - most notably known as the bassist and singer of Title Fight. Up until this point, Ned has written, sung, and played every note of Glitterer's music, but now with the debut album Looking Through The Shadeswhich will be released July 12 on ANTI-, he has brought collaboration into the fold: there are drums by his brother Ben Russin, a guitar solo by his brother Alex Russin, and production by Alex Giannascoli and Arthur Rizk.

Glitterer was born in 2017 and have released two EPs Glitterer and Not Glitterer. The debut full-length Looking Through the Shades was recorded in the cozy carpeted basement of the Russin family home, in Kingston, Pa., and co-produced by indie-rock prodigy Alex Giannascoli (also known as (Sandy) Alex G) and the Arthur Rizk (Code Orange, Power Trip, Sumerlands, the 2018 Grammy Awards). The album contains Glitterer's best-yet sonics and songs; it has been constructed in such a way as to evince a spirit - co-operative, semi-schizophrenic, greater than the sum of its parts - that is proper to rock bands and that is inaccessible to even the least self-involved Soundcloud rappers and bedroom artists. Simply put, Looking Through The Shades is the sound of a group of people playing music, together, in a room. Meanwhile, the lyrics are still reluctantly but rigorously self-aware, the choruses are still habit-formingly catchy, and the arrangements still carry not an ounce of excess fat. (Broadway World)

New album ‘Looking Through the Shades’ out July 12th