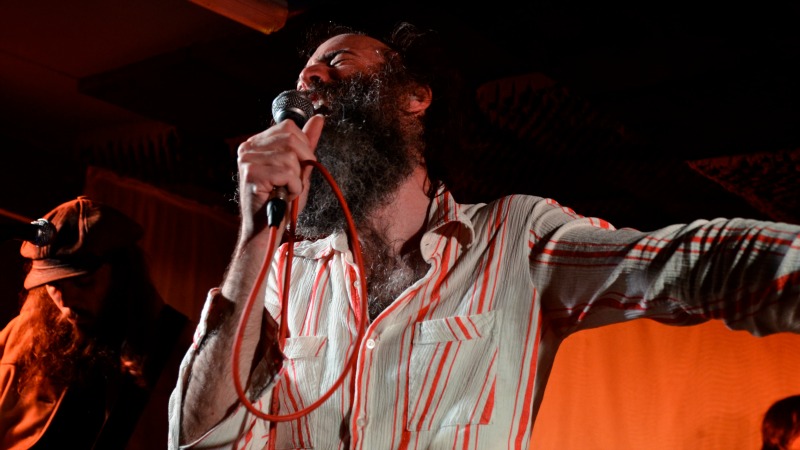 The evening started with We Are Strangers Minds, a solo act featuring acoustic guitar filtered through gizmos (technical term) to create loops. The sound is best described as John Martyn headlining Bloodstock – delicate frills & picking, with hefty riffs and jagged solos splashed around at will. The vocals worked well when semi-spoken and soft (complementing the sonic attack of the guitar loops) but the primal scream vocals distracted from the music – nonetheless, an act to add to the “check out again” list.

Next up, the hard-working Ulysses, direct from that Bath and more than familiar to regular gig goers. The great thing about the band is that  they can’t make their mind up whether or not they want to be a psychedelic beat group or a riff stomping 70s glam monster. So happily they do both, with the addition of exquisite harmonies. Over half the set was new material, with stand out cut “How Long?” closing the set, preceded by a barn storming rendition of “Eye on You”: a stomping ear worm of epic proportions. Oh, and special mention to Bath’s answer to Bill Ward on drums – Mr.Shane Aloysius Brimble, pounding the skins and keeping the groove funky.

Headliners Howlin’ Rain spent five hours getting to the venue and missed their sound check, but a good sound engineer, a talented band and a five minute tune up meant the band were firing on all four from the first tune. The four piece line-up blasted out seven cuts over the set, which sounds parsimonious but given that the songs were extended into blistering jams the crowd were more than satisfied. Ethan Miller opened proceedings with guitar in hand, but then abandoned the six string in order to testify with the fervor of fallen preacher: the stage unable to contain him as he joined the crowd on the floor. It was probably down to B24/7’s position stage front, but the mix did lose some of the ragged glory of Miller’s voice, but then the crowd was word perfect on the majority of tunes, easily heard over the guitar maelstrom.

Daniel Cervantes played scorching solos, complemented by Jeff McElroy who spent most of the show with a twin neck bass / guitar that he’d built himself (finishing touches made almost as the band walked on stage). Between them the guys whipped up a guitar frenzy of epic yet soulful proportions (with bonkers shape throwing from both). Not to be outdone Richard Bradley battered his kit to provide a thunderous foundation, his efforts resulting in a broken snare drum aborting “Big Red Moon” but a spare appeared from the crowd allowing the band to complete their set at full pelt. Difficult to pick out a stand out moment, but “Self Made Man” was probably the set’s peak.

It’s a brief few dates for the band this time, but let’s hope they’re back soon – and if you fancy a night of cosmic blues riffology jammed out with gleeful passion you’ll be there.